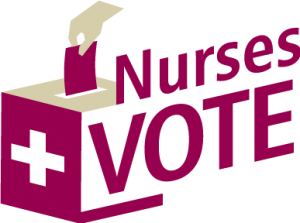 Your Accomplishments
Party Platforms
Election Priorities
The Truth About Ford

Nurses and health-care professionals helped change the narrative during this election.

Health-care issues – including the nursing shortage which is caused in part by disrespectful legislation like Bill 124 – were prominent in the media. Polling showed that health care was the top ranked issue for voters, indicating that your shared priorities resonated with Ontarians.

You kept the pressure on.

And remember, Doug Ford may have won a majority government, but the PCs only received 40.8% of the votes cast. A majority of votes were cast for parties who committed to supporting our shared election priorities.

Over the course of the campaign, nurses and health-care professionals initiated outreach activities to connect with colleagues in every ONA region, developed innovative strategies to get your 5 key priorities out in front of the candidates, and, stepped out of their comfort zone to have one-on-one conversations with ONA members in target ridings using new technologies including Call Hub and Prompt.

Your stats over the campaign:

Your stats over the campaign:

How do you know your collective action is working?

The day after the election, re-elected Premier Doug Ford told reporters “We’re going to sit down and negotiate fairly with … no matter what union it is,” stressing the government must be “fair with the people who are out there, working hard doing a great job, and we rely upon them.” (source)

The momentum you built throughout this election, as you fought together for a better, stronger, public health-care system was inspiring. Make no mistake: our collective actions during this election are just the beginning. Together, nurses and health-care professionals will continue to fight for patients, residents and clients – and for all Ontarians.

Although the results of the election are not in the best interests of members, patients, residents and clients, it is important to remember that the majority of Ontarians did not support the Progress Conservative party in the 2022 provincial election.

The PC party received 40.8 per cent of the votes cast, with the lowest voter turnout in history at 43.5 per cent of eligible voters casting a ballot. This means that the Ford government received a majority government with only 17.7% of Ontarians’ support.

In contrast, when you combine the votes of the Green Party, Liberals and New Democratic Party, they total up to 53.3 per cent. This is an important distinction to make because even though the PCs won a majority of the seats, they did not get a majority of the votes or support.

That also means that 53.3 per cent of Ontarians voted for parties who committed to repealing Bill 124, addressing the staffing crisis, ensuring the right to provide care in a safe environment, addressing the social determinants of health and keeping health care public, because all three of those parties included those issues in their party platforms.

There is large support for the issues that nurses and health-care workers care about and with the power of 68,000 members as well as the public, we have the ability to change government decisions, no matter who is elected.

Our work has just begun.

At Biennial 2021 and the Provincial Leadership Meeting 2022, these are the issues that you said were most important going into the Provincial election. Click the vision map to pause the slider.

Since the Ford government was elected in 2018, they have made a series of decisions that have negatively impacted our workplaces, health care, and communities. This condensed Ford Tracker, originally created by the Ontario Federation of Labour, showcases the government’s actions over the last four years. This proves that the government’s decisions to destabilize our public health–care system are not an accident, but part of a playbook to privatize our health care.