About Bill 124 and Actions

In 2019, the Ford government introduced and passed Bill 124, wage-suppression legislation negatively impacting registered nurses, nurse practitioners, health-care professionals and other public-sector workers. This bill limits wage increases to a maximum of one per cent total compensation for each of three years.

As nurses and health-care professionals, we do our best to provide high-quality care to our patients, residents, and clients day in and day out. Our invaluable work has never been more apparent than during the pandemic and ongoing health-care staffing crisis. We deserve equity, fairness and respect.

The Ontario Nurses’ Association welcomed the Ontario Superior Court’s decision, on November 29, that rules Bill 124 is unconstitutional and a violation of the Canadian Charter of Rights and Freedoms. In his decision, Justice Koehnen wrote, “I declare the Act… to be void and of no effect.”

This decision is a hard-fought win for ONA and public sector workers across the province. It is a vindication of the rights of nurses, health-care professionals and all workers. ONA’s position from the start was that this bill interfered with the Charter rights of public sector workers to freely negotiate a collective agreement.

That’s why we launched our court challenge against this legislation and why we have fought tirelessly for it to be repealed. This victory belongs to ONA members and other public sector workers who have advocated for years to defeat this legislation and bring its devastating impacts to light.

We will not back down until ONA members achieve justice. ONA is demanding the Ford government accept the court’s ruling and stop wasting taxpayer dollars fighting workers in court. Nurses and public sector workers have waited long enough for fairness. It’s time for nurses and health-care professionals to achieve a fair and respectful collective agreement and the wages they are owed.

On Mon. Dec. 12, ONA held telephone town halls to answer member questions about the Bill 124 court decision, ONA’s next steps and more. Select a session below to play a recording:

We’ve captured the main themes that were discussed in the town halls below:

ONA had negotiated wage reopeners in the contracts that were affected by Bill 124. What is the status of this issue?

ONA is moving ahead in reopening the contracts that were impacted by Bill 124. We have given the Ontario Hospital Association notice, and the OHA is now initiating a new mandate to address the reopening clause. Notice has also been given to nursing homes and other employers where contracts were restricted by Bill 124.

How will the reopening clause impact 2023's round of bargaining?

At this point, this has yet to be determined. It may be that the outcome of our renegotiations on Bill 124 may need to be known first so we have a starting point for this round. But if we’re not there, then we will be proceeding with this round as we normally would. However, ONA is hoping that the reopener will be settled with the hospitals prior to going into bargaining.

Will ONA be looking at negotiating retroactive pay from the date Bill 124 was enforced?

Yes, we will be seeking retroactive pay back to the date that Bill 124 first affected your collective agreement. For hospitals that are a part of the central agreement, it will be April 1, 2019. It’s whatever year members received their first one per cent under Bill 124.

When did ONA launch its Charter challenge and which other unions were also part of the challenge?

Bill 124 was passed on November 7, 2019, and ONA filed its Charter challenge in December of 2019. Through early 2020, a number of other unions, as well as a coalition under the Ontario Federation of Labour, all filed applications. In total there were 11 applications from different unions and groups of unions.

Regarding the appeal ruling that happened in Manitoba: What has ONA learned from that, and how is ONA going to apply what they learned in our case now?

If there is an appeal from the government, how will that affect the reopening of collective agreements impacted under Bill 124?

The November 29 court decision to strike down Bill 124 took effect immediately. As of that date, the bill is of no force and effect. If the government does appeal, it can seek a “stay”, which would need to be proven in court. That means the government would ask for the court decision to be paused and for Bill 124 to remain in effect and the collective agreements under Bill 124 to remain valid while the appeal was proceeding.

Since ONA has begun negotiations with employers under the reopener clauses, the more advanced those negotiations are, the more ONA will be able to demonstrate that there would be harm in granting the stay.

ONA’s position is go forward, and to carry on as we have planned. The only thing that can stop us is a stay or if the government is successful in an appeal. We’re going to continue our course and keep pushing.

Given that ONA was not successful with the Section 15 (gender bias) argument of our challenge, what steps will ONA be taking toward achieving parity with our male counterparts?

From our analysis of Section 15, the court accepted our evidence to say that, yes, these are female-dominated positions and that fundamentally there were issues around gender, largely a gender pay gap.

However, the court said that ONA didn’t make the complete analysis under Section 15. The court emphasized how important collective bargaining is for female-dominated professions such as nursing. We will continue to put evidence in front of arbitrators regarding the current provincial funding models, in addition to how the male-dominated professions such as police and firefighters are advancing in ways in which the nurses have not.

With the Hospital Central Negotiating Team beginning their work in January to get ready for this round of bargaining, we will be examining this issue in more detail.

If retroactive pay is awarded, will nurses who already left, but who were working during the time period that Bill 124 was in effect, be entitled to payment?

Generally, retro pay is awarded to people who have left, and we would seek that in our negotiations.

Will the home care sector have to undergo a moderation period under Bill 124?

The for-profit home care providers were never covered by Bill 124. However, not-for-profits like the Victorian Order of Nurses shouldn’t have any moderation periods now.

Is there anything preventing the government from using the notwithstanding clause for Bill 124 or bringing forth a similar bill?

There is nothing legally preventing the government from enacting a similar bill or retabling Bill 124 with the use of the notwithstanding clause. What would prevent the government from doing that, as we have seen earlier this fall, is other forms of action by unions.

What is ONA’s plan with respect to if Ford's appeal goes through, and how can we put more pressure on to achieve our goals? What are the union's steps and what's the legal team going to do?

ONA will continue to pressure the government as this unfolds. We have not stopped talking about their intention to appeal. We’ve asked them repeatedly not to do it. We’ll see if it falls on deaf ears or not.

If a government appeal is successful, the next legal step is to seek leave to appeal to the Supreme Court to have the case heard. ONA will vigorously defend this decision if the government intends to proceed with their appeal. ONA still does not have official documentation indicating a government appeal, so all we have is public statements, but ONA will vigorously protect the current decision to the best of our ability. 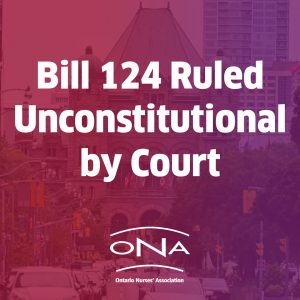 ONA and other labour unions launched their Charter challenge against Bill 124 in 2019 (more here). ONA submitted extensive evidence supporting our arguments for why Bill 124 violates the Charter, including from our front-line members.

The hearing for ONA and other unions’ Bill 124 constitutional challenge ran every day for two weeks, from Sept. 12-23, 2022. We presented our evidence on September 13 and 14. ONA’s legal team was Kate Hughes, Danielle Bisnar, and Janet Borowy of Cavalluzzo LLP.

Over the span of two days, ONA presented facts, affidavits, caselaw and supporting documentation – thousands of pages – in open court to Justice Koehnen of the Ontario Superior Court. It will be up to the Justice to rule whether Bill 124 contravenes the Charter of Rights and Freedoms, also known as the Charter.

We argue Bill 124 is unconstitutional on two main grounds:

ONA has highlighted this issue in media since Bill 124 was passed. ONA media releases, which have been picked up by many major media outlets, are also shared on social media.

ONA leaders have never stopped lobbying the government, participating in multiple meetings and consultations, and meeting directly with the President of the Treasury Board to express our members’ deep concerns with Bill 124.

In the 2022 provincial election, members across the province made Bill 124 an election issue and made three out of four major parties commit to repealing the bill if elected. Though Premier Doug Ford was re-elected with a majority government, most Ontarians across the province voted for a political party that wanted to repeal Bill 124 and address the health-care staffing crisis.

Premier Doug Ford has since been quoted several times, committing to give public sector works a wage increase of more than 1 per cent. Our pressure is working, but members must continue to push the government to stop fighting workers in court.

Now more than ever, we deserve recognition and reward. A fair and respectful wage increase is long overdue. 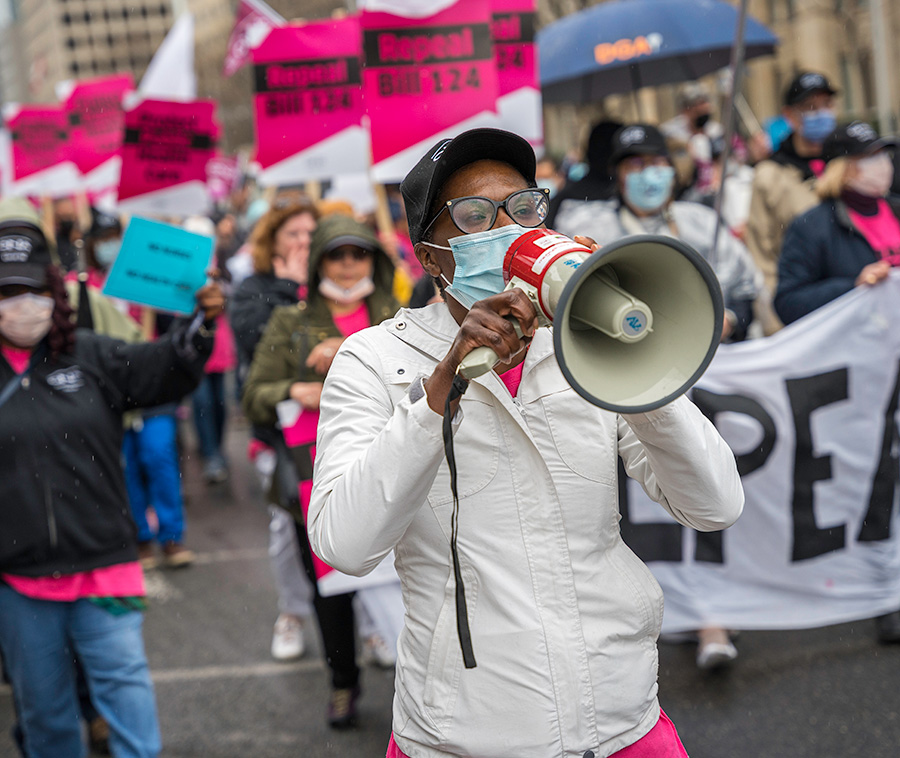