In 2022, on Emancipation Day (August 1st), the day designated by Canada’s House of Commons to commemorate the abolition of slavery in the British Empire, ONA’s Anti-Racism Member Advisory Team and ONA’s Anti-Racism and Anti-Oppression Working Group launched a series of resources to continue to bring awareness to current issues impacting those who are Indigenous, Black, Racialized and members of historically marginalized communities.

Please continue to visit this page as it will be continually updated with ONA’s ARAO events, education, and additional information.

If you would like to be more involved in our Anti-Racism and Anti-Oppression (ARAO) work, fill out our Expression of Interest Form and let us know if you’re interested in joining our Anti-Racism Member Advisory Team.

As the front line of health care in Ontario, ONA members understand that the intersection of race, income, housing, and other social determinants of health, place Indigenous, Black, Racialized and historically marginalized communities at greater risk.

ONA stands in solidarity with Indigenous, Black, Racialized and historically marginalized communities and allies in Canada and around the globe calling for justice. The equal treatment of our members, and the freedom from any forms of racism, discrimination and harassment in the workplace are core tenets of our union. ONA strongly supports achieving health equity in our system, and advocates for the examination of policy issues through a “social determinants of health” lens.

The Ontario Nurses’ Association has launched a four-year action plan that will help guide our union in addressing the ongoing racism and oppression that exists for so many of our members and staff, and within our communities.

The 2022-2026 Anti-Racism and Anti-Oppression (ARAO) Action Plan is the direct result of a call to action from our members, leaders and staff with lived experiences of intersectional forms of racism, including anti-Indigenous racism, anti-Black racism, discrimination and acts of exclusion. The Action Plan contains seven priority areas and 35 action items. 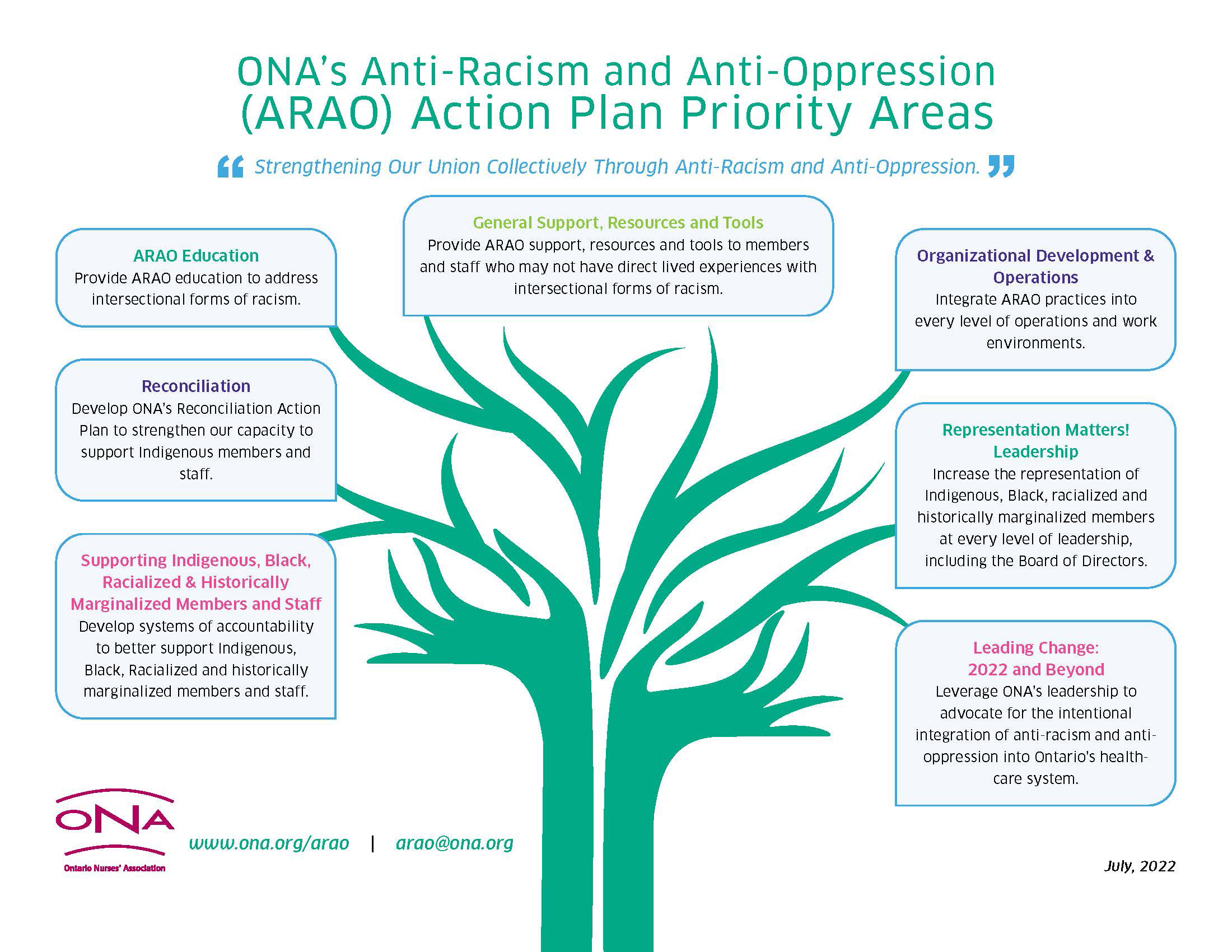 On March 24, 2021, the House of Commons voted unanimously to officially designate August 1st Emancipation Day in Canada. It marks the actual day in 1834 that the Slavery Abolition Act of 1833 came into effect across the British Empire. Although the Slavery Abolition Act abolished slavery throughout the British Empire (with the exceptions “of the Territories in the Possession of the East India Company”, the “Island of Ceylon” and “the Island of Saint Helena”; the exceptions were eliminated in 1843), only slaves below the age of six were freed. Enslaved people older than six years of age were re-designated as “apprentices” and required to work, 40 hours per week without pay, as part of compensation payment to their former owners. Full emancipation was finally achieved at midnight on July 31, 1838.

Canadians are not always aware that Black and Indigenous Peoples were once enslaved on the land that is now Canada. Even after emancipation, African heritage and history continued to be erased by methods of segregation, murder, and systemic marginalization. Those who fought enslavement were pivotal in shaping our society to be as diverse as it is today.

Emancipation Day is not just about honouring the past, as the legacy of slavery continues to have an affect on the lives of African Canadians today. Emancipation Day is about learning Canada’s collective history — not rewriting that history, but telling a more complete history that includes the history of slavery. Therefore, each August 1, Canadians are invited to reflect, educate, and engage in the ongoing fight against intersectional forms of anti-Black racism and discrimination.

ONA’s ARAO Education Series – You may be prompted to set up an account on ONA’s eLearning platform, if you do not already have one.