National Day of Remembrance and Action on Violence Against Women

On December 6, the Ontario Nurses' Association observes the National Day of Remembrance and Action on Violence Against Women. The day was established by the Parliament of Canada to mark the anniversary of the 1989 murders of 14 women at l'École Polytechnique de Montréal, who were killed because of their sex. We come together to remember the victims, while also reflecting on the woman, girls, LGBTQI2S+ and gender-diverse individuals for whom gender-based violence continues to be a daily reality. We remember all the women and gender-diverse people who have lost their lives to gender-based violence, including Lori Dupont, RN, an ONA member, who was killed by a coworker who was also her ex-boyfriend, in 2005 while working at Windsor’s Hotel-Dieu Grace Hospital.

About every six days, a woman in Canada is killed by their intimate partner. The COVID-19 pandemic has caused spikes in gender-based violence in Canada and around the world. The Ontario Association of Interval and Transition Houses says 20 per cent of the 70 shelters it represents have had increased crisis calls during the pandemic.

Health-care workers are no strangers to violence and harassment against women. ONA is a strong advocate for violence prevention in our workplaces and in society. Registered nurses and health-care professionals face precarious and dangerous situations on the job each day. It is our goal, as the union for nurses and health-care professionals in Ontario, to work with employers, governments and health system stakeholders to ensure our members’ workplaces are safe and free from harassment and violence.

The 16 Days of Activism Against Gender-Based Violence

The 16 Days of Activism Against Gender-Based Violence begins on November 25 with the International Day for the Elimination of Violence Against Women and ends on December 10 with International Human Rights Day. It also includes the National Day of Remembrance and Action on Violence Against Women. The 16 Days of Activism are an opportunity to come together to call out, speak up and renew our commitment to end gender-based violence. 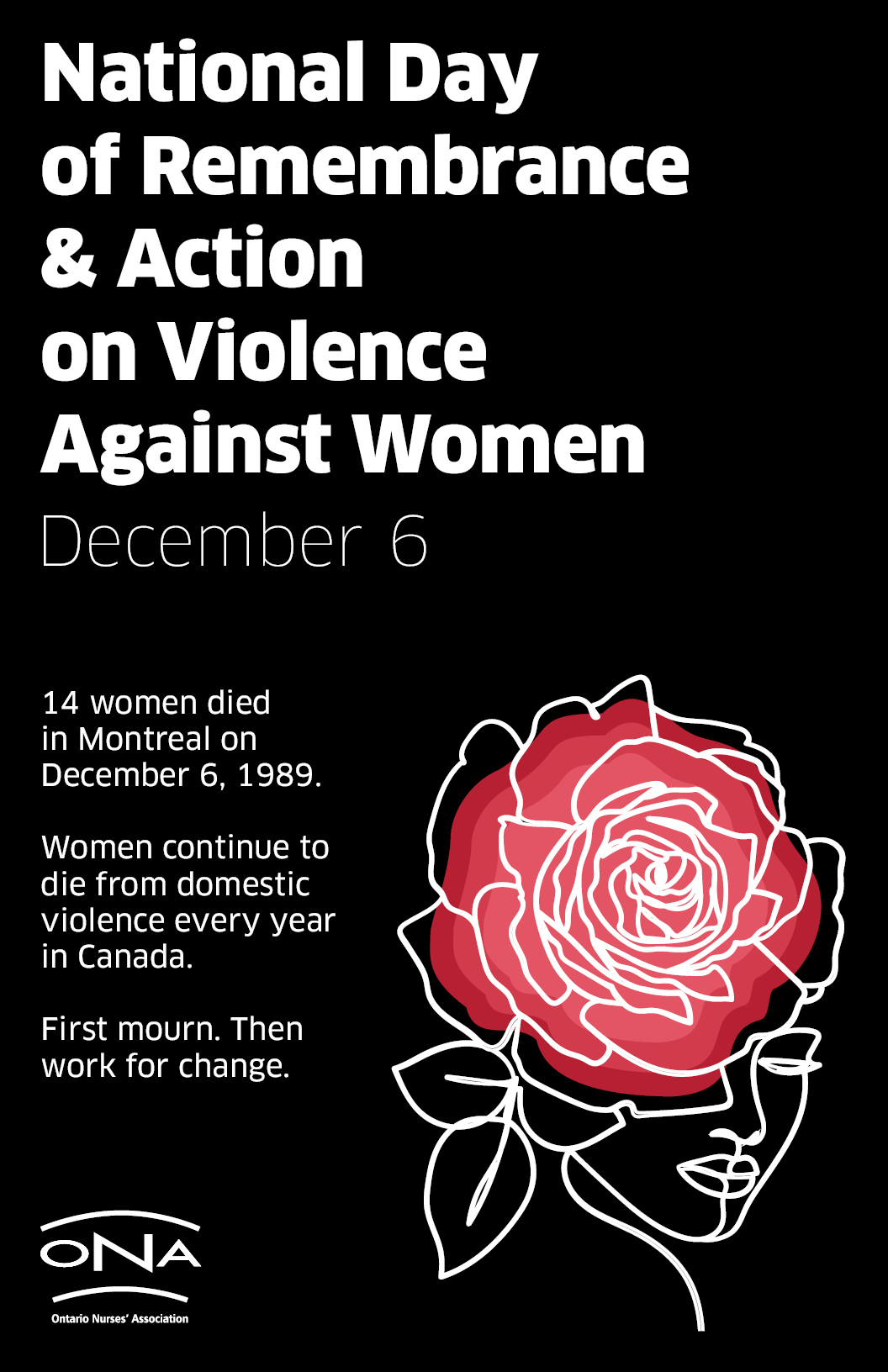 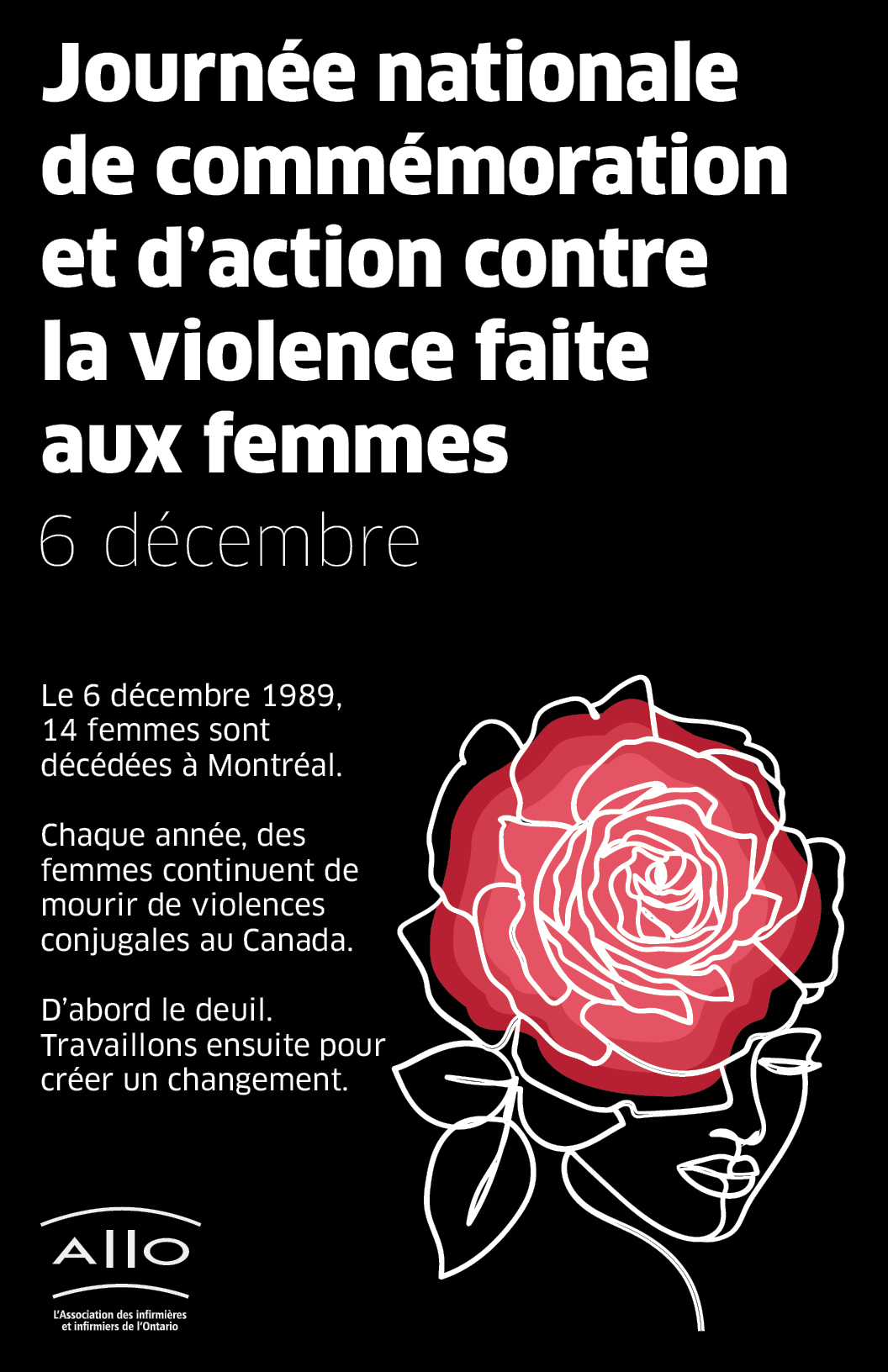 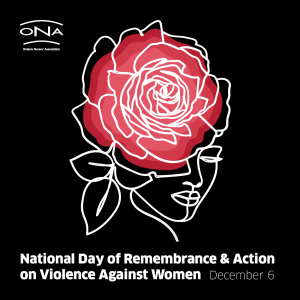 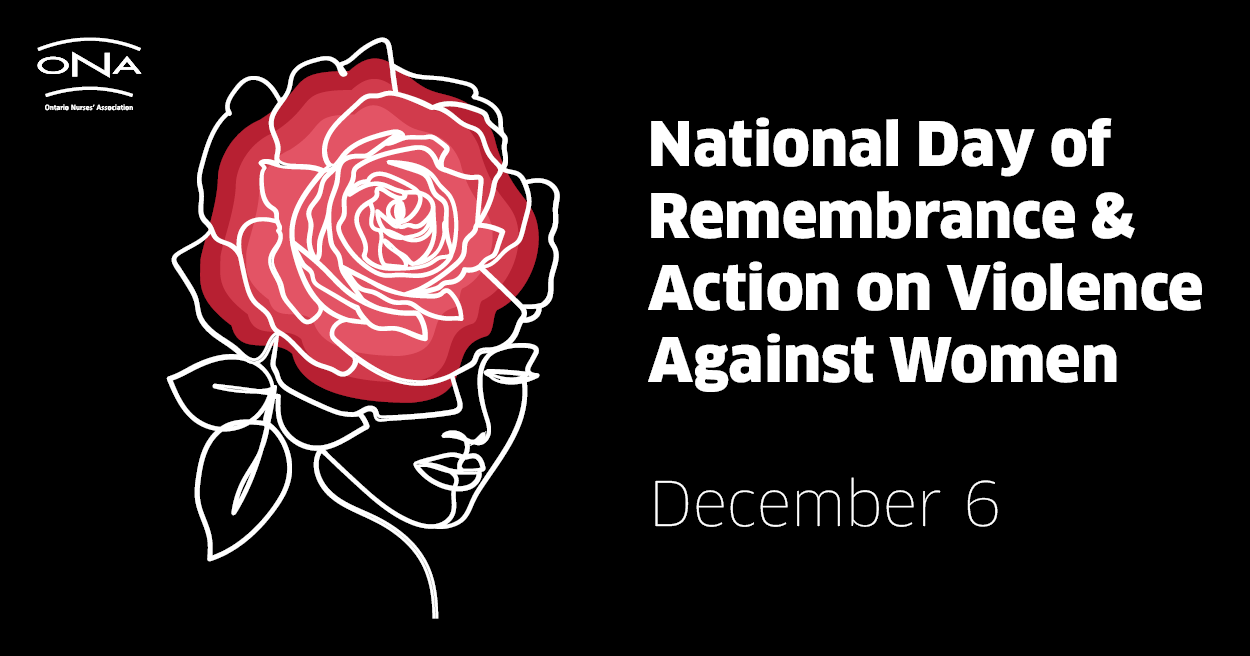 The Rose Campaign is YWCA Canada's national advocacy campaign to end violence against women and girls. The Campaign takes its name from the original Rose Button, created to commemorate the young women who were killed at l'École Polytechnique de Montréal.

The Canadian Women's Foundation presents the facts and FAQs on gender-based violence.

The Women and Gender Equality Canada website has information and resources for individuals and organizations hoping to raise awareness and take action against gender-based violence and discrimination.

If you are seeking abuse related services/support, contact one of Ontario’s 24-hour provincial helplines:

Find your closest violence against women service via www.sheltersafe.ca.