Remembrance Day: Lest We Forget

On Remembrance Day, we honour and remember the men and women who left their families, friends and communities to fight for a better life for all.

Nurses were the first women in the Canadian military - 12 women served in the Northwest Rebellion in 1885 as nurses in military hospitals. According to Veteran Affairs Canada, military nursing began in the Crimean War and then in the American Civil War. Nurses played a significant role in the war effort, relieving soldiers of their suffering and providing medical treatment.

More than 3,000 nurses served in the Canadian Army Medical Corps during World War I, including 2,504 who were sent overseas. Of the 2,504 Canadian nurses who served overseas, 53 were killed during the war. On two occasions in 1918, Canadian hospitals in Europe were hit by enemy bombers and several nurses were killed in the line of duty. On June 27, 1918, a German U-Boat torpedoed and sank the Canadian hospital ship, the Llandovery Castle. All 14 nurses on board were killed.

Veterans Affairs Canada has prepared a detailed history and tribute to Canadian Nursing Sisters, "unyielding women who braved all the hardships of war to do their duty and care for their patients, and of those who nursed the casualties left in the wake of war."

In 1926 The Nursing Sisters' Memorial was erected in Parliament Hill's Hall of Honour to recognize the courage and sacrifice of nurses who gave their lives in service from the earliest days of Canada until World War I. The inscription at the base of the memorial reads:

Erected by the nurses of Canada in remembrance of their sisters who gave their lives in the Great War, Nineteen Fourteen-Eighteen, and to perpetuate a noble tradition in the relations of the old world and the new.

Led by the Spirit of Humanity across the seas woman, by her tender ministrations to those in need, has given to the world the example of heroic service embracing three centuries of Canadian history.

The Nursing Sisters' Memorial is located in the Hall of Honour in the centre block of the Parliament Buildings on Parliament Hill, Wellington Street, Ottawa.

At 11 a.m. on November 11, please stand in silence for two minutes in memory of all who made the ultimate sacrifice for our freedom and for those who continue in service to our country.

On November 11, Lest We Forget.

For a detailed look at the history of Canadian nurses "in uniform" during the First World War, visit the Canadian War Museum's online exhibit.

Click here to learn more about the Nurses' Memorial at Parliament Hill. 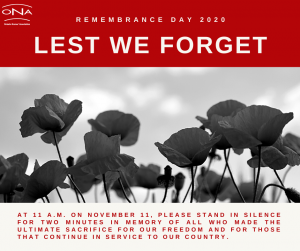